WHY INSTAGRAM? WHY 2 INSTAGRAMS?
My thoughts, words, and memories go years back on Instagram. The ways I used Instagram as an eighth grader and as a freshman in college, you could imagine are very different. Therefore, if you were to scroll to the bottom of my feed, you would not see anything from my glory days. Something I also find interesting is how my usernames have changed over time. For example, going from “gymnastsarah4” to “sarah.elizabeth.rawley.” In my head, if my username seems “mature” or more “adultish” then maybe my feed would seem more grown-up. Having this ever-changing Instagram, I have accumulated over a thousand followers; some from random summer camps, some high school friends, my old gymnastics teammates, teachers, friend’s parents, long lost relatives, and obviously my closest friends. Becoming aware of who sees your posts effects what you post because once it is out to ALL of your followers, there is no secret hidden and no turning back. In December of 2017 I found myself not posting as often on my public Instagram. I'm still not sure what triggered this change, but my goal for my page is to express fun moments and share memories with my followers, not give them a play by play of everyday of my life. So, I created a “finsta.” Yes, a fake Instagram. A private Instagram that I only allow the people I am closest to follow. Interesting enough, the name is the opposite reason I have one. I use my finsta to show my real feelings and real situations happening. I don’t feel as though I have to worry as much who will come across these pictures or posts because I have control over who is allowed to follow me. My finsta does not expose anything inappropriate or immoral about myself. It is simply used as a place to be a bit more vulnerable to my audience.
THE BIG DECISION
Just recently I have made the decision to transfer to Dallas Baptist University in the fall of 2018. This decision was prayed over for a long time and kept a secret for months. Once I had applied and was accepted, the news started to get out to groups of people. I wanted to make sure that people were hearing the truth and my words had not been twisted. The first thing I did was run to my most used social media platform and allow all one-thousand of my followers know what was going on. Crazy to me that I relied on the internet to get something so important to me out to some of my closest people I cherish dearly.
"PUT TOGETHER" SARAH
Below are the four pictures attached to this one post and a close up of the caption. ​ 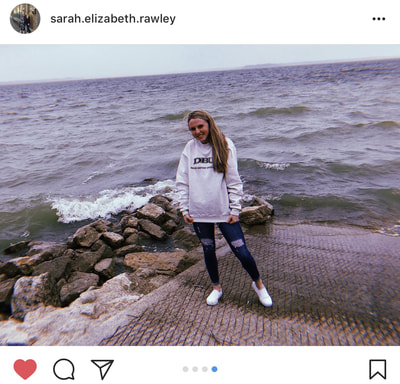 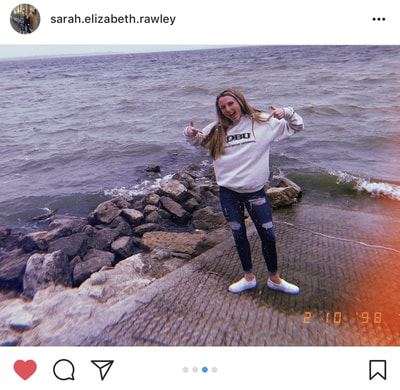 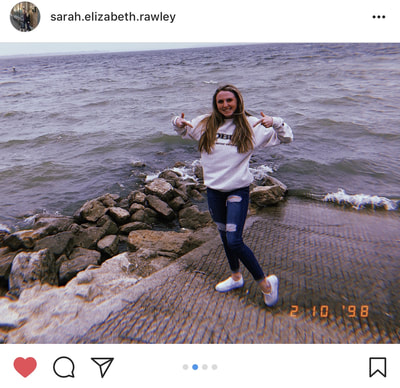 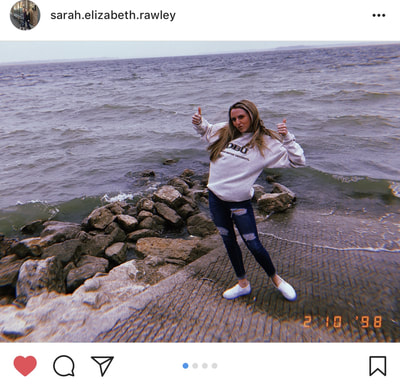 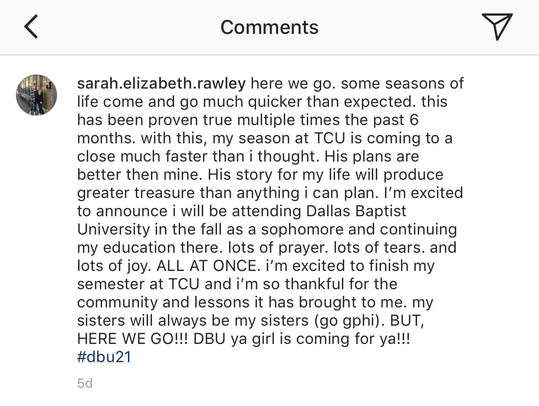 ​            First let me address the pictures themselves. The location of these pictures may seem very insignificant to the audience, besides the fact it’s a pretty cool background. For myself, there was much deeper intentions behind the location of these pictures. I am standing on a boat ramp I visit often. My friends and I like to go out here and relax, listen to music, and enjoy each-others company. During this big change in my life, being in a familiar place is always peaceful. This place is familiar. This place is peaceful.
Yes, this is an interesting edit. I have recently discovered an app called “Huji” and it takes pictures and “develops” them like a disposable camera. The edit added a dramatic effect. I’m not sure there was any significant meaning behind this edit. However, I did enjoy that it made my dirty white shoes to appear very white and my skin to appear very tan.
​            It is no coincidence that I went out of my way to dress in a Dallas Baptist University (DBU) sweatshirt. I learned when taking these pictures, it can be awkward to pose alone and also draw attention to what I was trying to point out. I wanted to make sure the wind didn’t blow my hair crazy and cover the words on the shirt, but also not look like I had just gotten out of bed. I made sure my facial expressions showed I was excited and confident. Posting one picture is easier for readers to scroll right past. If my audience noticed a set of pictures with a long caption I thought maybe they would notice it was a bigger deal and take time to read the post. I used my own strategy to attract my audience.
The caption for this post could have made or break the post. My words had to be clear and concise. I had to respect TCU and my community. I did not want to give the vibe that I hate it. That is not the case, I love TCU. Also, I needed to make sure I sounded excited about my new transition to DBU without being over the top. Balance was key. I started by stating how seasons come and go in life. Then I was straight forward when saying my season at TCU was over. I needed my audience to see word for word that I would not be coming back to TCU. Next, I addressed how Jesus has completely guided this hard decision and that my ways are not His ways and His path is better than mine. I didn’t want my audience to think I have put myself in the drivers position of my life; Instead Jesus was still the center of it all. After, I was straight forward again when explaining where I would be attending and when it would be happening. My ultimate goal was to be straight and to the point, not to offend either sides of the parties, and show my audience that I will continue to lean towards God’s plan for my life. If I'm being quite honest, I contemplated the caption for many hours and changed it multiple times. I had a few friends read it before posting to make sure I was being rational and kind.
NOW FOR SOME RAW TRUTH AND NERVOUSNESS
Below is the picture and caption I posted on my mystery finsta account. I choose to not expose the name of my account in order to keep the private aspect. 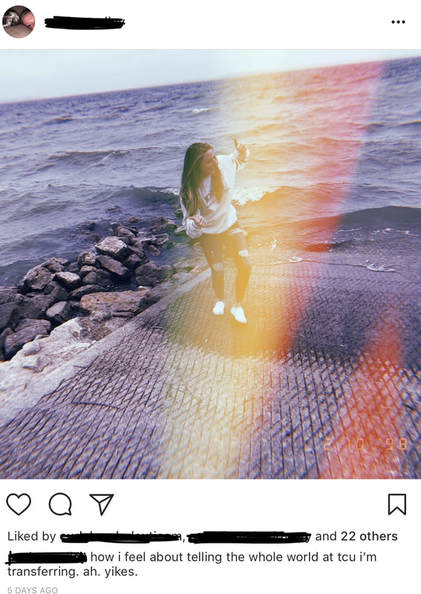 Immediately after posting on my main account I switched over to my finsta. With my heart racing, I clicked this picture and typed a caption very quickly. People who followed both accounts would get to read a more "put together" Sarah and then scroll straight down and realize how I was really feeling. My caption explains that I was specifically nervous about all of my TCU people finding out about the big transition. I had no idea what was to come. Mad friends? Broken hearts? People who understood? People who thought I was crazy? My finsta audience already knew about the big move because I had already posted about it a week before. I felt that telling my finsta before my main account would be necessary because they got to be the first ones to know. They are people who are closest to me and that I keep in close contact with often so making them feel special was important to me.
The picture looks way more dysfunctional compared to the original four posted on my main account. My head is turned laughing and my thumbs are still up. In this picture you cannot see the DBU on my sweatshirt. That was not the point of this post.  The goal of the picture was to show that I was a nervous wreck about my post on the “big” account. I was confident in my transition but I knew telling people would be a struggle. So, THUMBS UP. Take notice of the amount of likes on this picture. My crowd grew much smaller. It went from about 250 likes on the big post to a small 24 likes.
I like how the disposable edit formed a red line down the front of the picture. This may be something quirky that I have learned and came to mind when I posted this. The color red stands for "alert" or "emergancy." In the moment of posting this, that is exactly how I was feeling. I believe the disposable edit plays a greater roll in this picture rather than the other 4 above.
--------------------------------------------------------------
I take loads of pictures and love to share them with my audience. I also like that I have chosen to have 2 separate accounts. I believe this allows me to tend to two different types of crowds and not be scared to show the not so "put together" Sarah as expected from most social media accounts. My big decision to transfer to Dallas Baptist University is something I have prayed, stressed, cried, and found loads of joy in. I'm happy I get to share that with everyone and express how this is a decision I have set in God's hands. Thanks Instagram for being a place I can connect with my community and express myself.​